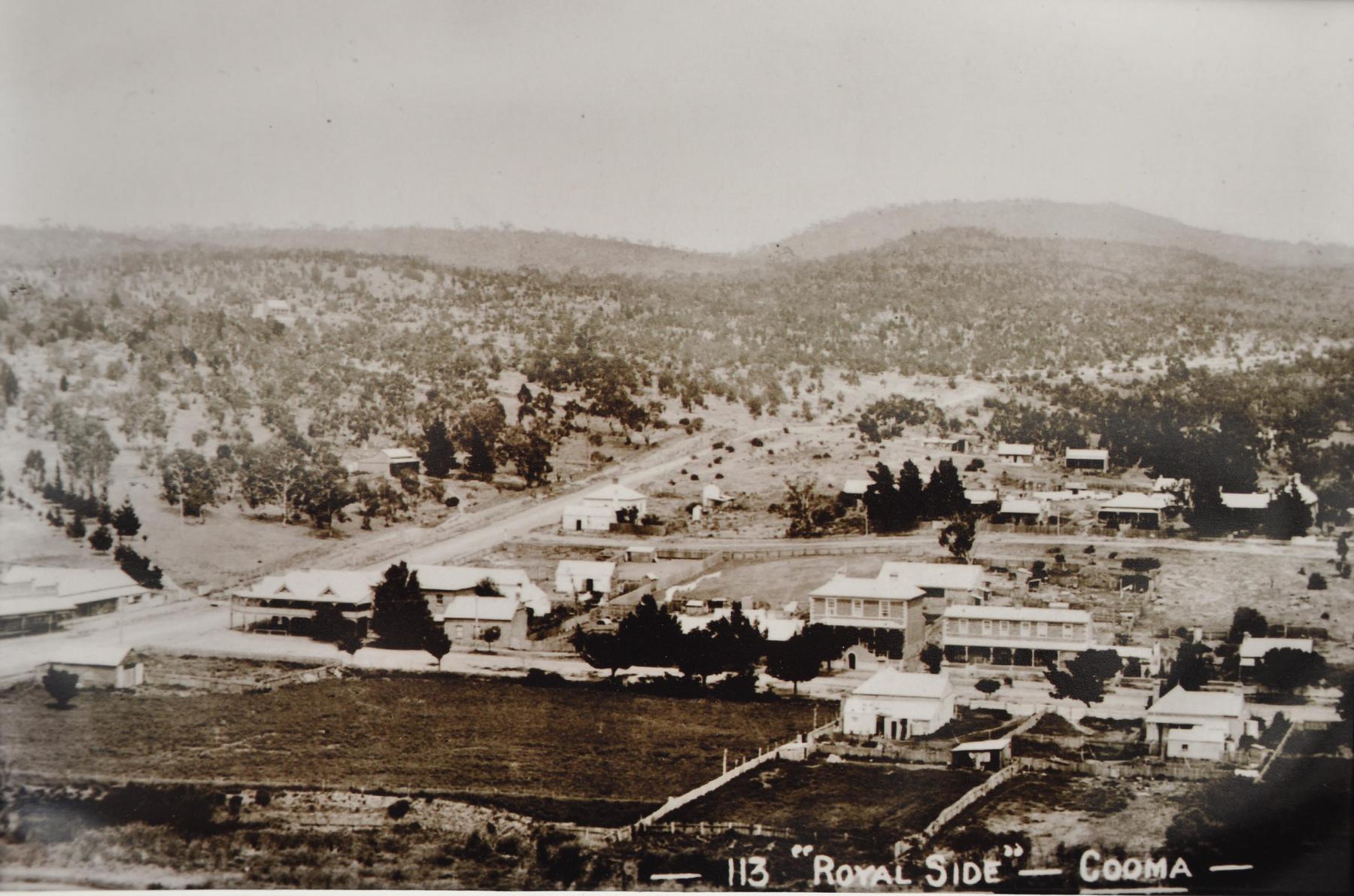 By Janine BeckerJanuary 12, 2020No Comments

Cooma (‘Kuma’), established in 1849, derives its name from the Aboriginal word coombah, variously meaning “lake,” “sandbank,” “one,” or “big swamp.” The town grew during the nearby Kiandra gold rush in 1860 and was proclaimed a municipality in 1879. In 1981 it became part of Cooma-Monaro Shire.

The local Ngarigo people lived in the area for about 15,000 years, and their country covered approximately what is the Cooma Monaro Shire today, but also extended to Thredbo, Bombala and Suggan Buggan. They travelled in extended family groups, and were sometimes thought to be the same tribe as their neighbours to the west, the Walgalu. Their neighbours to the north were the Ngunawal, and the Yuin Nation to the east. 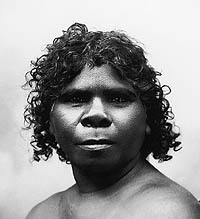 This photograph taken by Charles Kerry around 1890 shows Boona, a Ngarigo woman from the Monaro region which surrounded the Snowy River. She was referred to as a Queen of the Manero by whites. Although the title did not accurately reflect Aboriginal tribal hierarchies, it may well have indicated that she held a significant place within her tribal group.

The first European explorers arrived in 1823. In 1845 it was estimated that there were about 1400 aboriginal people on the Monaro (‘Monaroo’), and by 1892 that number had reduced to 2. Of course many aboriginal people died from diseases introduced by white settlers, but many also moved away from the area, and some joined clans in the Bega and Bermagui areas.

Currie, Ovens and Throsby had previously been as far south as Lake George and the Queanbeyan River, on reports of a mighty river further south called the ‘Morombidgee’. In 1823, Currie, Ovens, Throsby, Wild and an Aboriginal guide sighted the ‘chain of clear downs’ known as the ‘Monaroo’ and reached as far south as the Numeralla River before having to turn back due to lack of provisions.

The discovery of largely treeless plains suitable for cattle and sheep grazing was a very important one for the growing colony. Within a few years, there were squatters and shepherds all over the Monaro. The quest for land was huge, and in 1837, squatting districts were created that were outside of the colony’s official settled districts. As late as 1850, the Cooma Monaro district was known as the ‘Maneroo Squatting District’. Later, the squatters were able to apply for a lease for 1/25th of their land, and then later still, ‘selectors’ were able to purchase the land.

Cooma town was originally Kuma Station. In 1849 when the area was surveyed by Townsend, there existed the residence of the Crown Lands Commissioner Lambie, as well as a store, stockyard, inn, school, stable and blacksmith’s shop owned by Kirwan. A year later, blocks were being sold in the new town, and the Kiandra goldrush of 1859 boosted development. The railway arrived in 1888.

“Until the end of World War II Cooma was a typical example of a fairly prosperous rural town dependent on the vicissitudes of the sheep and cattle markets which fluctuated according to economic forces and the weather.” 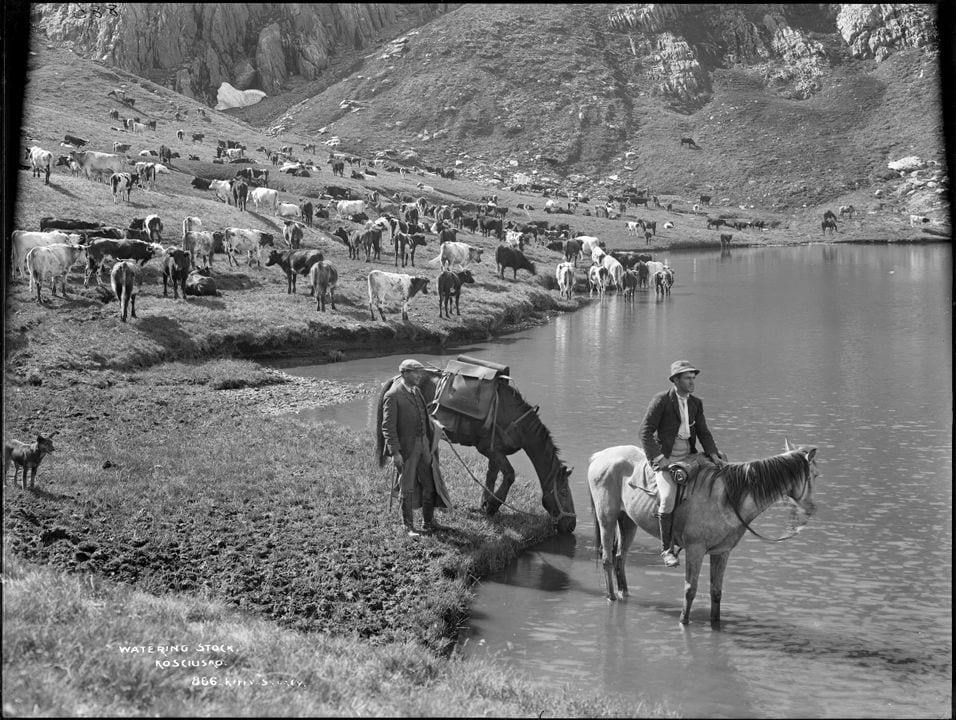 Watering cattle at Blue Lake in what is now the UNESCO Biosphere Reserve of Kosciuszko National Park. Photo by Charles Kerry.

Stock were grazed in the high country in summer above treeline from the 1860s. The graziers did not have to pay for this extra grazing land until 1917 when 14 year snow leases began to be taken up. Graziers still drove their stock to graze on the remaining high country crown leases today. Both wheat and dairy had a very short history in the area.

With the influx of men and their families post WWII to work on The Snowy Scheme, there eventuated quite a housing shortage. The Snowy Authority established their own factory to produce prefabricated houses.

The closest railhead to Mount Kosciuszko, Cooma was selected (in 1949) as the headquarters of the massive Snowy Mountains Hydro-Electric Scheme, an irrigation project in the Australian Alps. During the peak years of construction, Cooma acquired a population of more than 10,000. With the completion of the Snowy Mountains project in 1972, the town experienced some reduction in growth. Its economy, however, was sustained by lumbering, joinery work, steel fabrication, sheep and cattle farming, and tourism based on the Alpine region, including Kosciuszko National Park, and the dams, reservoirs, and aqueducts of the Snowy Mountains project.

Life in Cooma during ‘The Scheme’ years is  exciting and colourful enough to fill a whole other blog post, so stay tuned!

In the meantime, check out our Snowy Mountains Hydro Majestic Tour that travels through all the best that the modern day Monaro has to offer…