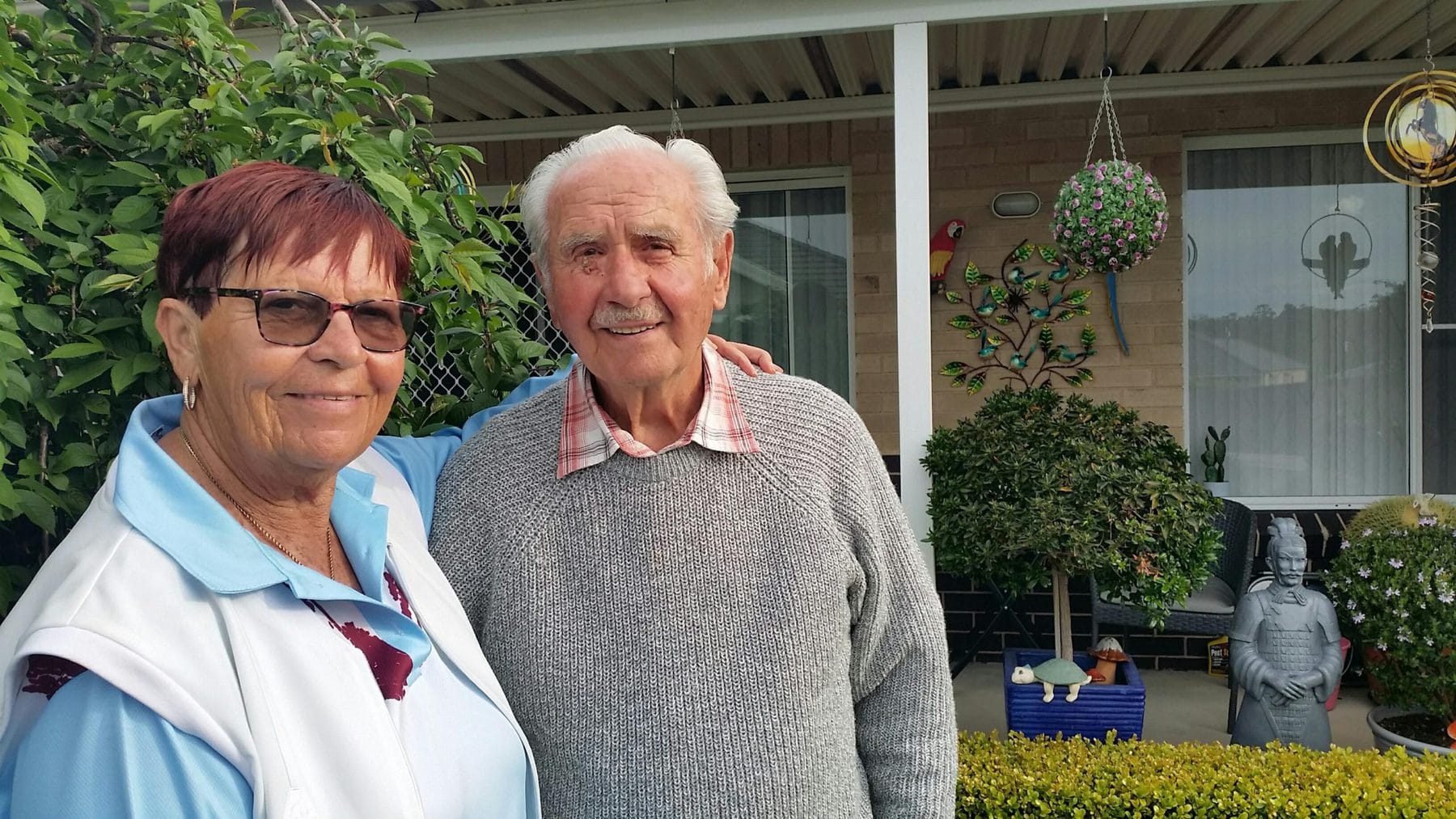 “John, your future is in Australia!”

By Janine BeckerNovember 2, 2020No Comments

My dad and his wife live in an over 55s estate near Lithgow in NSW. Just around the corner from their villa is what is, in my opinion, the most beautiful garden in the estate. Lawn that is like carpet, copious numbers of beautiful flowering plants, and the best collection of garden ornaments and gnomes I have ever seen! This is the home of John Maruschko and his wife Daniella. 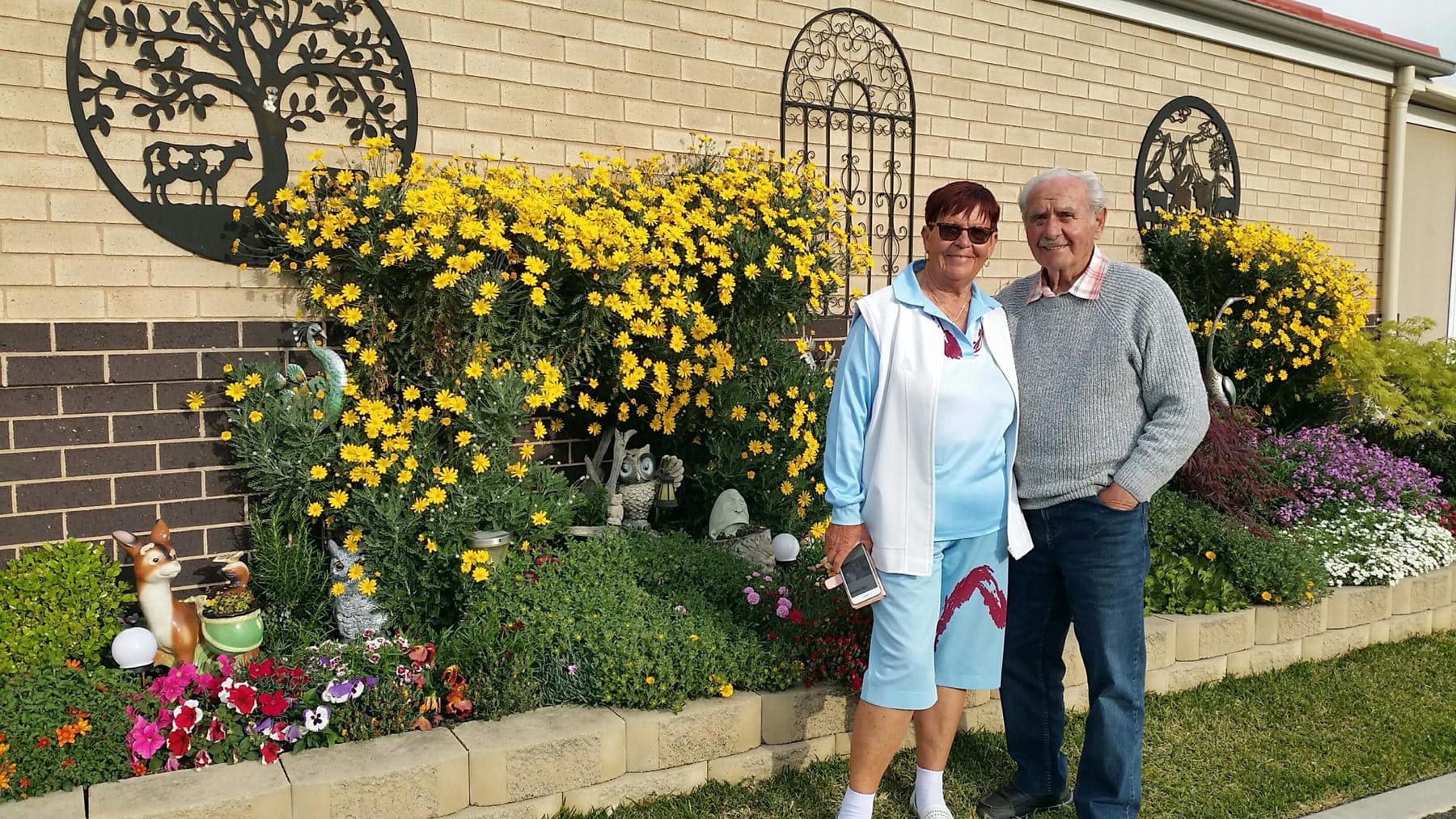 Daniella and John outside part of their fabulous garden at Treeview Estates near Lithgow.

I met John a couple of years ago while walking past his house on our regular morning walk. He is a very friendly man with an open, kind face and a big smile, and he doesn’t mind a chat. It was during one our chats that I discovered he worked on the Snowy Mountains Hydro Electric Scheme in the 1950s.

The Scheme (or The Snowy, as it is affectionately called) was the biggest engineering feat in Australia’s history and was designed to divert water from the high alpine west of the divide to irrigate crops, while at the same time generating hydro-electricity. The Scheme took 25 years to build – from 1949 to 1974 – and was completed on time and on budget. Over 100,000 workers from over 30 countries in post war Europe came to Australia to work on The Scheme, giving Cooma the title of ‘Australia’s birthplace of multiculturalism.’

John Maruschko was born on the 7th November 1930 in Graz, Austria (yes, he is 90 this year!) and compulsorily served in the Hitler Youth during WWII and then worked in a silk factory. By 1950 at age 19, he was desperate to get out of Europe because ‘There was nothing left after the war, nothing for young people to do, only farming, and you only got food from working on a farm. There was construction work if you were a carpenter, but nothing else.’

In 1950 he went to a refugee camp in Salzburg Austria, to await a permit to go to any country that would have him. He found that he was too young to go to many countries, including Canada which was his dream. There was a German lady that worked in the office at the camp, and John asked her where she thought he should go. She replied ‘John, your future is in Australia!’ John then asked; ‘Where is that?’!

John arrived in Australia in 1950 and went straight to a migrant hostel in Bathurst. He then had to pay off his fare to Australia by working for two years on the railway in Chullora, Sydney, whilst living in tin sheds. ‘The most lazy Aussies I ever saw worked on the railway!’ John said. It was here that he met another helpful woman who told him that her husband was working in the Snowy Mountains.

‘The Snowy Scheme took me right away because they needed lots of people. All the workers were “newcomers” or they called us “Wogs”! Who built the scheme? The Wogs! The Aussies came for the money, but after two weeks they would say “F@#k this job!” because it was too hard. It was winter, and there you had to work. Even in the snow. I didn’t mind because I liked winter sport and I was used to winter.’

John spent most of his two and a half years on The Scheme working as a labourer for a Norwegian company based in Island Bend – the closest camp to Guthega Dam and Munyang power station – about 30km from Jindabyne. John and his crew stayed in either tents or barracks, and he vividly remembers when the turbines at the power station were first tested, and the released water virtually washed the camp away! He also said that before the test, they built a dam of rocks below the power station (possibly with the thought that they may release too much water), and the water blew the dam apart and sent boulders flying everywhere! ‘I can still see them flying!’ he says with a giggle.

From what I had previously read about The Scheme, I got the impression that Cooma was the centre of all things social and colourful – a bustling town of nightclubs, bars and brothels – but John recalls Cooma as being pretty quiet compared to the busier smaller work camps.

‘There were a lot of men and boys, and every pay day in our lunchroom they put the tables together and gambled. I was never, never in it. I said “I work very hard for my money and I am not going to lose it.” There were women from Sydney that came to Island Bend “for business” but I was never interested.’ The business women apparently brought watchmen to look after them, who also had to watch out for police who often came to the camps to check on other procedural and legal compliance matters. 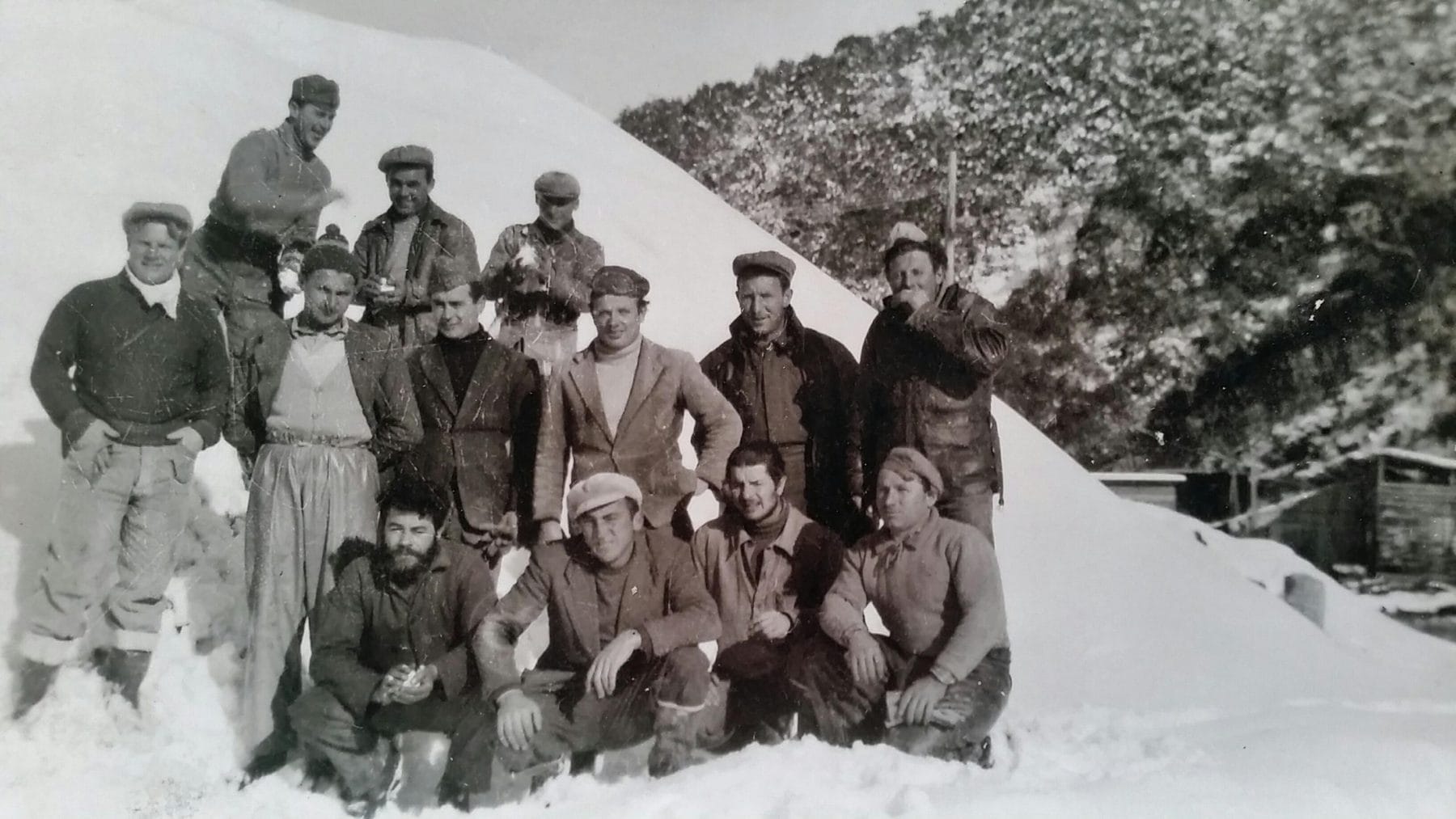 This photo was taken at Munyang power station, and of the 13 men, only one was an Aussie. ‘And if you lit a fire under his bum, he wouldn’t jump!’ says John. ‘The men were my shift. We always worked together on day, afternoon, and night shift.’ John said that the men worked through the night under the light of lamps that were refilled every morning. In his ‘shift’ of men were also Yugoslavs, Poles, Russians and Italians.

With all those young hardworking men living and working in close quarters, there were bound to be some characters that stood out, and in John’s book it was the Italians. ‘The Italians liked swearing, liked fighting and were always fun. I remember pouring concrete once and we had to bring it to the Italians in a lorry, but they were waiting in the wrong place, swearing their heads off!’

With 121 recorded deaths during the construction of the scheme, it is no surprise that John also has his sad memories. John was good friends with a German carpenter who one day stepped on a loose piece of scaffold and fell to the ground from a great height. He died on his way to Cooma Hospital. ‘He was in Australia to save money to go back to Germany and buy a motorbike, but they sent him back in a box’ recalls John.

The completion of Guthega Dam and Munyang Power Station early in The Scheme in 1955 was important for the newly elected Menzies government to show the success and productivity of this huge and expensive infrastructure project. It seems that even ‘Pig Iron Bob’ Menzies himself knew who to credit this early success to during the official opening of the power station when he said (in John’s words); ‘Thank you boys, because if I had only Aussie workers, they wouldn’t have even started yet!’

After staying on at Island Bend for two more weeks to clean up, John then moved on to work on the construction of Warragamba Dam in western Sydney. He didn’t like this work nearly as much as working on The Snowy, as it was very regimented and repetitive and certainly didn’t have the same atmosphere or comradery. And the food was worse (apparently the food at Island Bend was exceptional)!

John’s wife Daniella says that he can remember a lot about his years on the Snowy but can’t remember what he did two days ago. John says that ‘That is because it was exciting, and nothing exciting happens now.’ The Snowy years must have been the glory days for a lot of men, despite all the hard work. The excitement of a new country and a new life, making new friends, and being part of the building of something great, would have been an experience hard to replicate.

For the 40th anniversary of The Scheme in 2014, Snowy Scheme workers were asked if they wanted their name on a commemorative plaque to be displayed in Darling Harbour in Sydney. ‘But we had to pay $250 for it!’ Consequently, John’s name is not on the plaque.

Surely we owe a little more to the men and women who built what is still today, one of the greatest engineering feats in the world. The Scheme’s impact on the physical, environmental, social and political fabric of Australia continues until today. I often tell our tour guests that I would not be living and working in the Snowies today if not for The Scheme. Some of those Snowy Scheme workers from Europe who loved their snowsports like John, stayed on in the Monaro and helped start our local ski industry. From there evolved one of the most unique tourist destinations in Australia. 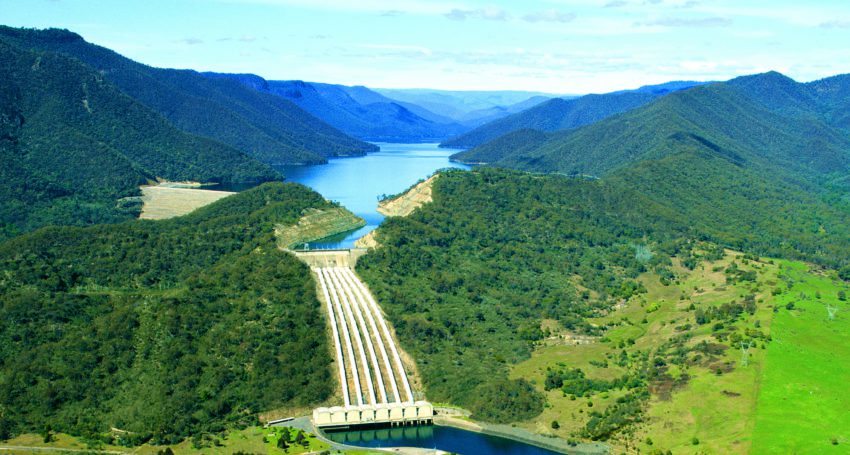 Our Snowy Mountains Hydro Majestic tour visits many significant sites that are part of The Scheme, whilst enjoying the grandeur of the spectacular Kosciuszko National Park. Departing Canberra, this is a five day, four night small group tour with a difference…